That’s an old picture of Mason. He’s been prop sitting for a while, but he still won’t lift a hand when sitting. This week in OT the therapist placed a toy in front of him and he lifted his hand and reached for it. This surprised all of us! It’s HUGE that he’s finally taking the risk of lifting a hand off the floor! One step closer to independent sitting.

Another thing we are working on is kneeling and standing. Mason hates both. He usually cries and will not bear any weight on his feet. The therapist holds his legs to stand and has never been able to release her hands. But, this week, he stood ON HIS OWN FOR 30 SECONDS!

He also knelt on his own and held that position for a few seconds! 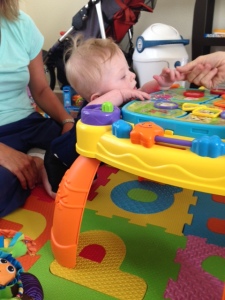 He does wear a vest, which helps support his core. He also wears hip helpers, to help keep his legs together. Mason loves to have frog legs. But, he’s on step closer to standing and kneeling on his own!

Another big break through we had this week was with feeding. When we eat, we insert the food into the center of our mouths, then we use our tongue to push it to either side. Mason doesn’t understand to push the food to either side, so instead he spits it out. So, we’ve been skipping that step and placing the food directly to one side or the other. But, this week I tried feeding him by placing the food straight in his mouth and he pushed it to the side and ate it! He didn’t spit it out! Although, it still managed to get all over his face. 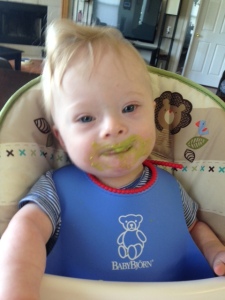 This was a great week, developmentally, for Mason! I’m so proud of all his hard work and love to see him accomplish these little milestones. I think sometimes as parents we constantly look to the next stage- crawling, walking, talking, and forget to enjoy the stage our kids are in and appreciate the things that they are doing. Mason definitely makes us stop and appreciate the little things in life!

To close, I want to brag on my mom a bit. Here is a pictures of her holding Mason after one of his therapies. 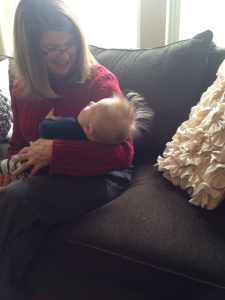 She comes to EVERY one of Mason’s therapies! She works full time and is busy, but she makes coming to Mason’s therapy a priority. As a mom, his therapies aren’t easy to sit through. He usually cries through the last half because he is tired and overworked. My heart breaks for him. I wish these milestones could come easily to him just like many other babies. It helps so much having my mom there for support and encouragement! Thank you, Mom, for your selflessness and all that you do with Mason. I LOVE YOU!